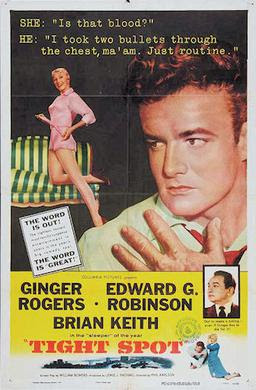 It’s not hard to figure out that Phil Karlson’s Tight Spot was based on a play. The small, intimate cast, the sparse number of sets, the long monologues, everything about it screams a story made for the stage. And indeed the film was based on Leonard Kantor’s play Dead Pigeon from which, one assumes, it took its Aristotelian unities of time and space.

Loosely inspired by the American government’s coercion of Virginia Hill to testify against her boyfriend, notorious mobster Bugsy Siegel, it takes place mostly in a single hotel room in a single day as Sherry Conley (Ginger Rogers), a model sent upstate on false charges, struggles with the decision to risk her life testifying against gangster Benjamin Costain (Lorne Greene). The government’s offer to commute the rest of her sentence in exchange for cooperation is tempting, but Sherry has no reason to believe Uncle Sam can or will protect her. Guarding her is Lt. Vince Striker (Brian Keith), a seemingly hard-boiled detective with the heart of a delicate romantic softie. Before the end of their time together, Sherry will fall for his quiet stoicism, calming demeanor, and deadpan snark.

And for once, we can believe in their overnight courtship because their chemistry, while subdued, is undeniable. Much of this comes from Sherry herself, a marvelous character brought to life by Rogers playing against type as a sneering, cynical tough gal with an acid tongue and brassy attitude. (Rogers has a ball chewing screenwriter William Bowers’ purply dialogue. My personal favorite: “Well, these are the people that you don’t doubt their word. When they tell you somebody’s been destroyed in the swamp, you don’t ask for wet shoes as proof.”) Rogers does almost all the film’s emotional heavy lifting and she brilliantly manages everything from defiant bravado to wistful introspection to hysterical horror.

Despite being a dialogue driven film, famed cinematographer Burnett Guffey does a wonderful job keeping the visuals from growing stale and flat amidst all the talk talk talking. Consider the brilliant opening scene where the cops escort a doomed witness to a Manhattan courthouse: shot largely in claustrophobic close-ups within a car interior, it signals the witness’s imminent death better than a snippet of Mozart’s “Dies Irae.”

The cinematic equivalent of a bottle episode of television—a bottle noir, if you will—Tight Spot is a delicious drink of something strong, sharp, yet soothing.
Posted by Steve Kopian at April 10, 2020