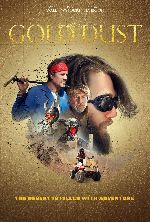 I'm just going to give you a pointer in regard to GOLD DUST because I have no clue what you'll think. I've read  pieces that loved it, some that hated it and a dew that reflect my view which is "Yea...well... that was....a thing."

The lot has two life long friends trying to find a lost hip in the desert. they end up colliding with some drug smuggler, some kids and some other crazies.

Personally I admire that it tried to be something different, a kind of grown up GOONIES but wackier. At the same time I don't think the film pulls it together. The film seems to take forever to click into a direction and once it gets going a lot of it required we just go with it (it feels like a shaggy dog tale). While a great deal of it made me smile (hence I am writing this film up)  there is too much randomness to the events and there is a sense that writer director and star David Wall was making this up as he went a long in the wrong sort of way.

I have no clue what you'll think but the film hits VOD today so you're on your own.

And it has new music from Cage The Elephant
Posted by Steve Kopian at April 07, 2020