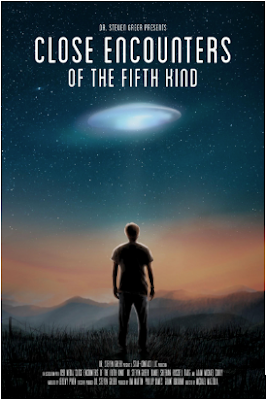 Follow up UNACKNOWLEDGED s a look at how the governments of the world have changed the long held narrative to UFOs and aliens aren't real to acknowledging that something is going on and we are having visitation and how that is now being spun so that the secret government can spin it so they can use the threat of an intergalactic war to create a one government world. Dr Steven Greer and people like him are here to save us by attempting to make contact with the aliens first.

First a statement of my view point- I have thousands of hours of UFO and paranormal videos. I have hundreds or books on the subject. While I have been not as dilignt in keeping up on the various topics over the last few years- owing to a History Channel dumbing down of the discussion I am well versed on a the subjects covered.

I say that because as entertaining as this film is I am left to shake my head about a great deal of it.  have severe problems with the idea of grand conspiracies and the notion of the deep state and related ideas of the Illuminati and other secret governments. Large scale conspiracies tend not to be there  simply because you can shut people up. Do I think Greer and his notions of alien visitation are  factual? Definitely some of it is.  The problem is that a lot of this has problems and while I trust Greer (I have been aware of his work for years) I am not certain of the people feeding him information. There really is a lunatic fringe that spout things, like the QAnon and other loony tales, that just come from jokesters and the unwell.

If you like stories of UFOs and the paranormal I highly recommend this film.
Posted by Steve Kopian at April 07, 2020