Stay At Home Festival: Films Fifty Two and Fifty Three: Nate Hood on The Brothers Rico [1957] and The Sniper [1952] 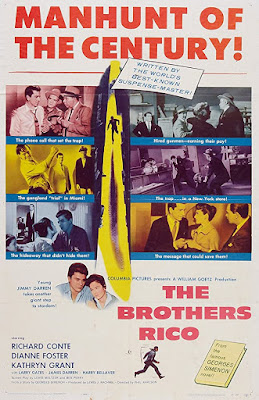 It’s both blessing and curse that Phil Karlson is remembered primarily for his 1973 cult classic Walking Tall (1973): a blessing because it’s one of the most striking revenge fantasies of the 70s; a curse because it’s largely wiped out our cultural memory of Karlson as one the unsung heroes of midcentury American genre filmmaking. He never reached the same level of renown as fellow B-movie titans Samuel Fuller or Henry Hathaway, but his films had a viciousness few could match, best demonstrated in the horrific kidnapping and murder sequence of an innocent black girl in The Phenix City Story (1955).

There’s violence and killing, too, in The Brothers Rico, but what physical carnage appears onscreen pales before the psychic damage forced upon its hero Eddie Rico (Richard Conte). Eddie is part of that grandest tradition of film noir protagonists: the good man with a bad past who’s helplessly drawn back into it. Several years after retiring as an accountant for a major crime syndicate, Eddie has established himself as a legitimate businessman with a thriving laundry company in Florida. He has a loving wife, a luxurious home, and plans to adopt a little boy. But then a phone call from an old associate drags him back into the world of organized crime, throwing him into a maelstrom of betrayal that will see him accidentally help destroy his two brothers.

But here’s what elevates Eddie’s story into the realm of high tragedy: the entire time he’s setting in motion the destruction of his loved ones he’s convinced that the syndicate and its avuncular leader Sid Kubik (Larry Gates) mean right by him. He ignores every well-meaning piece of advice from friends and family that he’s being manipulated, that Sid plans on betraying him so he can get to his brothers (both gangsters on the lam who may or may not have plans to squeal to the authorities). His sudden realization of his betrayal when he learns it’s too late to save them is downright Shakespearean, but it’s the Catholic sense of doom pervading the film’s atmosphere that makes it so distinctively Karlson’s. (There’s no way Martin Scorsese hasn’t seen and loved this movie what with its adoring portrayal of inner city Italians.)

In a world where everyone from cops to bank tellers are in on the take, the only sin is naivety. And Eddie has that in spades. 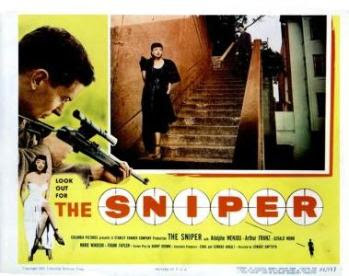 Stop me if you’ve heard this one. A disturbed young man with a violent hatred towards women seeks medical help for his psychosis. But he’s brushed aside by overworked, disinterested medical professionals, forced back onto the streets where his hatred festers. Soon he gets his hands on a gun—never mind how, the streets and shops are full of them. Losing himself to his illness he starts shooting women. First, it’s ones he feels sexually possessive of but can’t have, then ones he meets on the streets, then complete strangers.

If what I just described sounds like the profile of a modern mass shooter, it might surprise you to learn it’s actually a description of Eddie Miller (Arthur Franz), the central character of Edward Dmytryk’s underrated noir The Sniper. Without even trying, this nearly seventy year old film diagnoses in primitive pop-psychological terms a particularly virulent strain of toxic, murderous American masculinity that thrives even today.

In the film—a mixture of moody character study and dispassionate police procedural that intercuts Eddie’s descent into homicidal hysteria with the police investigation hunting him headed by police psychologist Lt. Frank Kafka (Adolphe Menjou)—Eddie is referred to as a “sexual predator,” not because he sexually assaults his victims but because his victims all share the same sex. In modern parlance, he’d probably be referred to as a serial killer since he’s psychologically disturbed, his victims all fit a profile, and he has a cooling off period between kills.

But it’s hard not to see reflections of deranged mass shooters, particularly Charles Whitman, the former U.S. Marine responsible for the 1966 University of Texas tower shooting who, like Eddie, was a reluctant killer compelled by some internal derangement to murder. (Both left notes for the authorities confessing that they literally couldn’t stop themselves from killing.)

But crucially, Dmytrky doesn’t sensationalize his material—the murder scenes are shocking, yes, but shot with a grim, objective detachment. Instead, he approaches it as a social problem/message film (probably due to the influence of producer Stanley Kramer) that contextualizes Eddie’s actions as the symptoms of an overworked, underfunded police force and general public ignorance about the motivations and backgrounds of criminals. In essence, the film is a plea for a stronger social safety net, improved gun control, and swift but humane imprisonment and treatment of the criminally ill.

If only we’d listened back then…

[Both films are now streaming on the Criterion Channel]