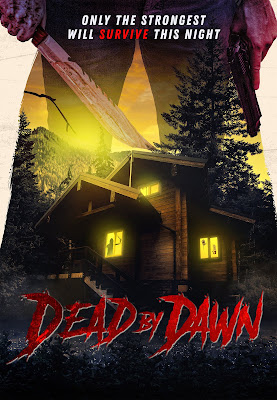 Suicidal man ends up having to protect a young woman from a bunch of bad men and women who want to carry her off for nefarious purposes.

I'm sorry if that's a bit general but the problem is that the film is painfully all over the place and I want to not give too much away....then again I really can't recommend this film so I don't know why I'm trying to protect the plot.

Messy home invasion crime thriller /horror film is plagued by a variety of problems from cheap effects, to an uneven cast and plot holes you can drive a truck through. This film doesn't really make much sense anywhere along the line and it makes impossible to care about hat happens.

To me the biggest problem here is the fact that this a really bad woman's revenge film written by someone (a guy) who doesn't understand humans especially women. I don't say that lightly in that this film paints everyone other than Lulu and her protector as vile scum. The film really seems to hate men, taking the stance that "all men are creepy monsters and should be killed" to the most ridiculous level. Every man in this film is beyond scum. Its laughably awful to the point that even female friends who regularly say horrible things about men in general and would rather the sex, as a whole, disappear from existence, would have problems. Every guy is abusive and rapey in the most extreme way. You want them all to die horribly (And I think out side of Lulu and a waitress the women are pretty bad too. Frankly you hate everyone in this film and come out wanting to kill everyone.) I think it might have worked had there been better written but the dialog, behaviors, and plot turns that are just plain stupid.

The only thing I've got nice to say about the film is while the removal of on character's eyes isn't well done it still makes you go yuck.

Absolutely a must miss film
Posted by Steve Kopian at April 07, 2020