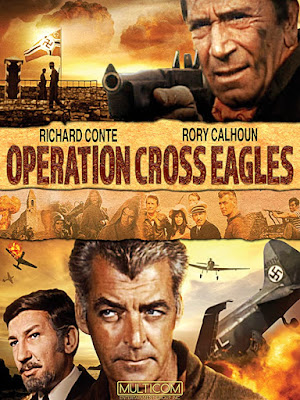 Yes I know a standard issue WW2 drama, why recommend it. First on its own nontaxing terms its enjoyable. more importantly the way Richard Conte shoots his action sequences are not your typical shoot 'em ups. There is thought behind them with the result I really wished Conte had directed more films than just this one.

Try it streaming on Amazon Prime

Actor Ricard Conte's only directorial effort is a standard story of the Second World War spiced up by some great directorial flourishes.

The plot has Conte being dropped into the Balkans on a secret mission. Unfortunately his arrival was revealed to the Nazi's and his men are all killed. Needing more men he latches onto Rory Calhoun and his men who are just leaving the country after blowing up an oil field. With the help of some partisans the men look to free a downed courier who is carrying information on an up coming invasion by the allies.

Its a standard plot, one that you've seen a thousand times before. What is not so standard is the way Conte films the action. Often we are high up or in locations that make you realize that these are real location and not just sets. The strafing sequence where Conte loses his men really knocked my socks off. It's a sequence that feels very real. Much of the film is like that, it feels like it been shot in a real place at a real event.

To be fair the film does have some flaws. Its a film that is clearly low budget. Some of the editing is ragged with some truly atrocious death scenes cut into other wise exciting action sequences. I won't get into the terrible day for night shooting that simply spoils the effect.

Flaws and all I really liked this breezy little film. I recommend it for those wanting a good little B film or anyone wanting a film that doesn't look like any other film.

Worth searching out
Posted by Steve Kopian at April 08, 2020