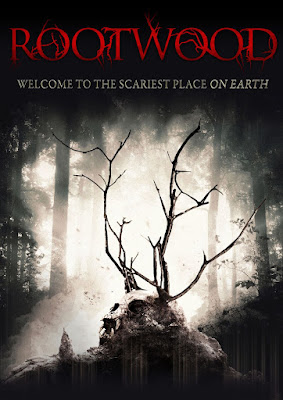 Hitting home video on Tuesday is ROOTWOOD the story of a pair of podcasters hired to make a documentary about a haunted forest. it seems years before a woodsman traded his soul to the devil in exchange for the devil protecting the forest.

For the most part this is an unexpectedly good little horror film has its share of creepy moments. Actually outside of the scenes having to do with their producer this is one of the better B horror films that I've seen recently. All of the stuff in the woods is spooky in the right sort of a way with genuine tension and real scares. They are good enough that they make me want to recommended the film for any horror lover despite the flaws.

As I said the only problem with the film is the sequences involving the woman who sends the podcasters into the woods. The sequences feel contrived and poorly acted. While its easy to dismiss the earlier sequences since that leads into the insanity in the woods, the poor acting and contrived nature hurts the ending of the film when events move back to Hollywood and the film is heading toward a conclusion. The poor nature of the sequences makes me understand why the IMDB rating for this film is only a five.

However if you can forgive or ignore the crappy sequences I heartily recommend this nifty little chiller.