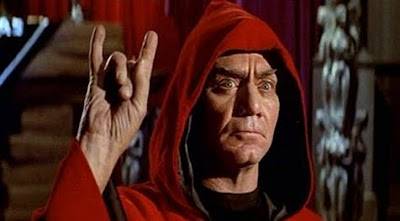 This film makes no sense

On the other hand the film’s dream like logic involving a devil cult trying to get back the book of members is a purely visceral horror film. The lack of sense makes it so anything can happen. Assuming that you aren’t fighting the plot and just going with it you’re going to be frightened since the whole affair seems to be off kilter, Events seem to have been imported from the next reality and not connected to our world.

The film more specifically has a group of Satanists, either the reincarnations of or the actual undead members taking on a family that long ago opposed them and has vowed to destroy them. Somehow they end up in a ghost town in the desert, where a container of the souls of the damned rests. It all ends with the title event which causes most of the cast to melt.

It’s scary stuff with Ernest Borgnine’s Corbis being literally the stuff of nightmares for generations of kids, myself included. His gruff, nastiness coupled with his transformation into a goat like devil scared the crap out of thousands of kids, and it still makes me uneasy.

The cast adds weight to it. In addition to Borgnine there is Ida Lupino, William Shatner, Eddie Albert. Kenan Wynn, Tom Skerrit and some guy named in a blink and you'll miss him role John Tavolta.

This is one of those films that is perfect for a rainy night on the couch doing drive-in movies. (the drive in is where I first saw this film)