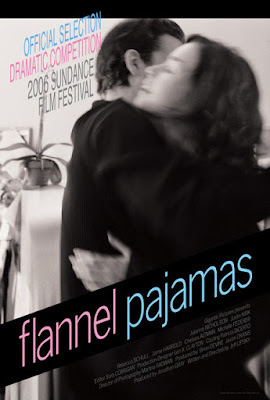 Writer/director/producer Jeff Lipsky is making his 2006 film FLANNEL PAJAMAS available for FREE.(Go here). It is the story of a couple who fall crazily in love and then out again.

As of this writing I have not seen the film. The film's arrival in my inbox as something I might want to share with Unseen's readers was at the same time as some other films I need to get reviewed for this week. Since I want to give you a chance to see it since Lipsky will be doing an on-line a live Q&A on Wednesday, April 15th at 7PM EST on Zoom I am putting the film out there for you to see.

The film can be found here. It mentions the Q&A at the start.
Posted by Steve Kopian at April 04, 2020

Email ThisBlogThis!Share to TwitterShare to FacebookShare to Pinterest
Labels: Stay at Home Fest