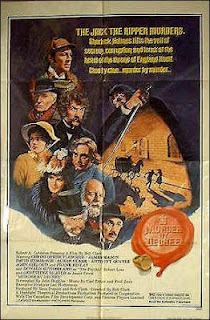 The point at which I stopped absolutely loving the Basil Rathbone Sherlock Holmes and went to only liking them was about fifteen minutes into this film. Somewhere in the first fifteen or so minutes of this film (perhaps the peas scene or perhaps the theater scene) when I understood why the Rathbone films are just good films and not great ones., basically over the course of the 14 Rathbone films you never understood why Homes and Watson were friends. If Watson was as big an idiot as he seems in the old movies Holmes would have tossed him out the window. Here in Murder by Decree Holmes and Watson are friends, real friends who take great joy in each other’s company.

Yes Murder by Decree is one of my top five, probably my top two or three Sherlock Holmes films of all time. Yes the mystery, concerning Holmes hunting Jack the Ripper is a good one, yes the cast is great but what makes the film work, even as the mystery occasionally stumbles is the relationship between the two friends. Was there ever a more likable homes and Watson than Christopher Plummer and James Mason? I don’t think so. To me the pair is better than even the one in the Jeremy Brett series since there is more laughter and more comradery between the pair, Holmes laughing at Watson’s displeasure at squooshed peas for example or smiling and saying “well done” when Watson turns anti-royalty sentiment into a cheer.

The plot has Holmes wading into the Ripper murders and finding not a simple mad man but a far reaching scandal involving the Royal family is a good one. It takes all of the theories concerning the killings and weaves them into something that actually works from start to finish. Other films such as Study in Terror, while good, never quite managed to weave reality and fantasy together as well as this film does. Actually this film kind of echoes not so much another Sherlock Homes film but the Hudlin Brother’s adaption of Eddie Campbell’s From Hell. While the stories are both Ripper related and they do vary from one another, they do seem to echo each other in the feeling, sense of place and focus on details.

To me this is one of those curl up on the couch films that makes a rainy night so much more bearable.