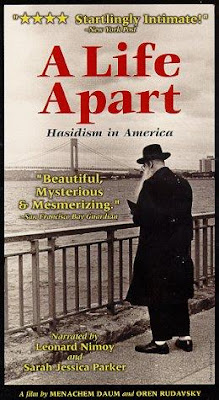 This is less a review than it is a pointer toward the film. I say that because I went into the film blindly thinking it was new film and then when I heard Leonard Nimoy’s voice I realized that I had seen the film when it was originally released.

This is the film to see if you want to know anything about the Hasidim. In an age with rising antisemitism and where the current pandemic made the group a target because of their refusal to follow mask mandates,  A Life Apart: Hasidism in America is a film that helps us take a step back. It’s a film breaks down the walls and suspicions that many feel toward the group who are seen as outsiders, even by other Jews,  and gives them a human face.