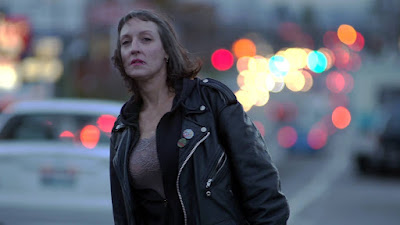 Sweetheart Deal is really good. I’m still working on how good, but for now that’s enough to get assure that you make an effort to see it either in person or streaming when the film plays at the Seattle Film Festival.

The film is the story of four women who are doing sex work along Aurora  Avenue in Seattle. The quartet are desperately trying to get their lives together, get off drugs and deal with the things that life is throwing at them. The area where they are working is becoming more and more dangerous and their options are becoming complicated.

There was a moment early on in Sweetheart Deal where I wasn’t sure if I liked the film or not. It was a moment early on where the rawness of the presentation had me wondering what I was seeing. This seemed to be an almost too intimate sort of a film where we are watching someone’s home video, I was wondering if I should be seeing this because the moment didn’t feel entirely like a “movie” moment. It felt like I was intruding on real life.. And then reality and reason crashed in and a I leaned forward into the film because I realized that it was this sort of raw “you are there” moment that made the film transcend being just another documentary.

I know some of you are going “no duh” but when you see as many documentaries for review as I do every year you tend to do a couple of things. First you often get lazy. You want things to break a certain way so you can breeze through it before you move on to the next thing.  At the same time you want films to surprise you and do the unexpected so you engage more fully. They are exact opposites of each other and there are times like the present when a film doesn’t do what’s expected and surprise you in such a way that you are thrown off until you can find your way. It took me a moment to find my way and then I did and I found myself in a really cool cinematic place.

I really liked this film a great deal. I liked that the film takes a side. Directors Elisa Levine and Gabriel Miller are clearly on the side of the women and they want us to be. While normally there should be some detachment in a documentary, there are times when a film should take a side. It should rally for its subjects so that we feel more for the women and their plight.

Co-directors  Elisa Levine and Gabriel Miller have made a super film.