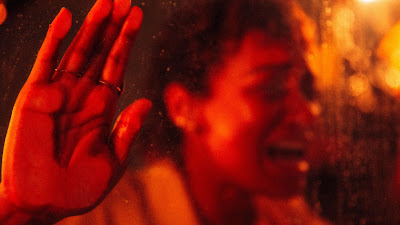 When an unusual object allows a group of teens to not only speak with the dead but allow them to enter their bodies, things get violent and personal when Mia’s mother reaches out from beyond the grave. The veil has lifted, and secrets will spill over the threshold, whether Mia and her friends like it or not. Directors Danny Philippou and Michael Philippou bring Sundance 2023 audiences TALK TO ME.

The thrill of taking the otherworldly hand becomes like a drug to the group. This shockingly dangerous behavior throws me back to my teen years, forcing this horror fan to wonder if I would suffer the same fate. A goody two shoes concerning drugs and alcohol does not negate my risky excursions in the New England woods in the pitch black of summer nights. As Mia and her friends battle the typical parental control and need to fit in, their heightened chase of danger spells nothing but doom. Writers Bill Hinzman and Daley Pearson, with concept by Danny Philippou, give us all the background we need to get sucked into this wild scenario, leaving just enough mystery to keep us salivating.

The practical fx are solid. The film’s special effects makeup team does a remarkable job of creeping the audience the fuck out. The work becomes more elaborate as the story progresses. It is spectacular.

This ensemble of young actors wowed with the complex task of playing “multiple roles” (without spoiling the action.) Sophia Wilde as Mia astounded me. The specificity of this performance rocked my world.

TALK TO ME almost demands a franchise. I have so many questions. I’d love a sequel and a prequel! TALK TO ME serves up Sundance 2023 audiences enough to chew on while filmmakers dig deeper into the film’s canon.