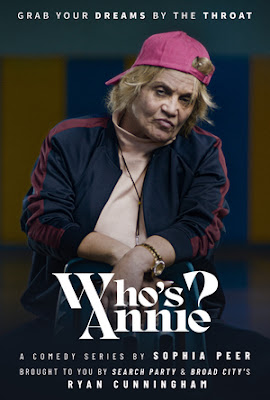 I want to say right at the start that I would love WHO'S ANNIE to go to series. I think it's got a great central character, Annie Pisapia as Annie, that makes this show sing. It has a lot of possibilities that make me want to see where it all goes.  I have one thing that I think they may have to change if it goes farther.
The show is about Annie, a well traveled actress  who has fought addiction, been in prison, married five times and lord knows what else. While doing a Burger Queen commercial she meets director Sophia Peer whose life is a mess. However she sees something in Annie and fashions a series about the two of them making a series about the two of them making a series.
Pisapia is fantastic. This could be a star making performance. She is a real person who never seems like she is acting. She is fully invested in everything that she is doing. I was enraptured. Watching the show all I could think was what I was going to see her in next and when will the awards roll in. I'm serious. She is that good.
The problem with the show is writer director creator and co-star Peer. Sure she is wonderful behind the camera, but unfortunately in front of it she is light weight.  This isn't to say she's bad, she's not, but she is no match for Pisapia and the rest of the cast.  I understand it's her show but where everyone sells what's going on, she really doesn't. The scene where she calls  Pisapia about the series while watching a TV news story about elder abuse and she hits her grandmother  seems wrong. Yes it belongs in another project, but Peer seems like she is in a sillier comedy. If they could recast her role this series would be a hit.
Definitely worth a look- especially for -Annie Pisapia is destined for greatness.
Posted by Steve Kopian at January 23, 2023

Email ThisBlogThis!Share to TwitterShare to FacebookShare to Pinterest
Labels: slamdance 2023