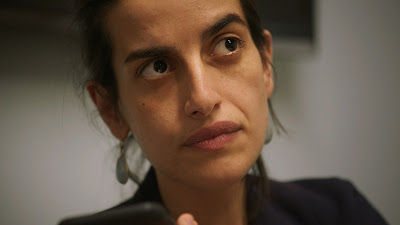 This film is a kick in the heart. A low key film that follows a young woman named Mati and those around her as she completes her final year of training to be hospital chaplain.

This  meditative film rocked me. Over the last few years one of my good friends and occasional Unseen Films writer Nate Hood has been studying to himself become a hospital chaplain.  We have had many conversations about his experiences while working in a hospital, and in seeing this film I saw what  he was experiencing. I understood better what he doing and why.

On a less personal level this is a wonderful film.  It’s a moving portrait of people answering a higher calling and trying to find a path to something spiritual within themselves. The film takes us the dual journey of Mati and ourselves as we are given time to ponder what we are seeing.

I should probably say that this film is not going to be for everyone. It is a deliberate film with long takes of Mati meeting patients and sitting in meetings. None of it is showy. The result is we fall into the rhythms of the hospital and Mati‘s life.  It becomes clear that there is no instant revelations. We watch people wrestle with life and death as well as all matters spiritual. Some people are not going to have the patience to watch people on the path to themselves and perhaps their god.

I don’t know what to say beyond that.  This is a film that has been haunting me for days since I saw it. Indeed I ended up sitting on this review for a few extra days as I tried to find the words to talk about the film, however I found that difficult since the film kicked up so much that required contemplation that I couldn’t write.

This film a quiet stunner and highly recommended.