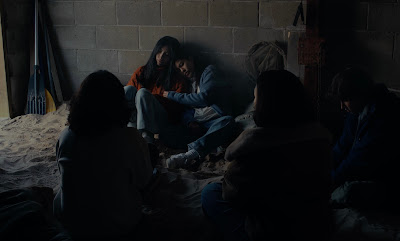 Five friends get together in a beach house and talk.

A couple of quick tidbits and quibbles with the promotional material to start. Ignore the talk of the budget. They are trying to promote the film as being made for a minimal amount of money. It’s a pointless come on. I say that because unless someone pointed it out you’d never know. This is a film about people and not effects so cost doesn’t enter into it.

The other thing to ignore the comparison to The Big Chill. It’s lazy. The film is good enough that it stands on it’s own feet.

What is not a quibble is the fact that this is a great little drama about friends hanging out. It’s a film that feel vital and alive. Told largely in long takes with the camera settling in just observing. It’s a method of story telling that sometimes can result in a film that feels static, but here, with everyone close together with the camera, the film feels alive. We are in this place with these people and living life. The choice by director Linh Tran is a good one because instead of making us outsiders (like in the recent NYFF film----) we are one of the group.

There is magic here.

Tran has assembled a magnificent cast. I have no idea if they were friends going into the film, but on screen everyone feels like they belong together. We sense connections that most films never manage. Everyone feels like they really are friends. Its this point that makes this film better in many ways than Big Chill it wants to compare itself to.

I really liked this film a great deal. While the characters are a good deal younger than myself, thoughts and feeling still connected to me. There is a reason that great art transcends age in that it speaks to something universal in us all. There is something about the human condition that touches us. WAITING… connects us to our humanity.

This is a small gem