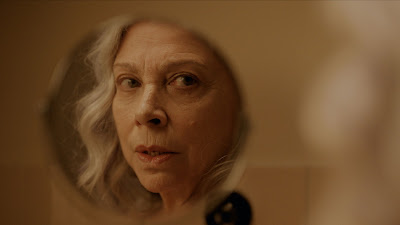 This film begins and ends with Manver. Giving a performance where she literally lets it all hang out, she gives us a portrait of life that rarely seen. I'm not talking about the nudity, I'm talking about the openness and emotional rawness of real people.  She isn't giving us a character crafted in a script but a living breathing emotionally charged one. Watching her go through her paces I felt connections to my own life. I saw the lives of many women I know reflecting back at me.

And it simply adds so much to writer director Patricia Ortega's film, which is wonderful on it's own terms. Yes I've been waxing poetic about Manver but she couldn't have been this good if Ortega didn't give her a character and situations to inhabit. Ortega keeps it all real and never goes for a laugh or a tear, but keeps everything close to how it would be so the laughs and tears come naturally.  Its a perfectly modulated film that stops being a film and simply becomes life.

What a glorious film.

I can't recommend it enough.