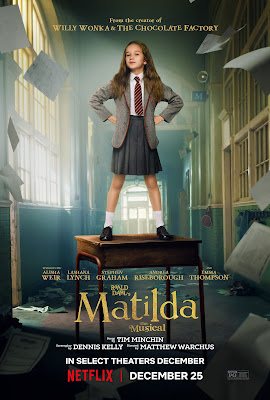 This big screen version of the musical has me scratching my head as to why Netflix hasn’t been pushing the film for awards consideration.  Most assuredly the film is the best of the recent musicals such as IN THE HEIGHTS and WESTSIDE STORY and is eye popping enough that it should be up for all sorts of technical awards.

Based on a novel by Roald Dahl the plot of the film has a super smart and charming Matilda being sent to an oppressive school by her parents and finding the strength to take on the world.

This is the second big screen version of the story, the first was by Danny DeVito and was not a musical. This time out the book is filtered through the long running musical that featured songs by Tim Minchin. It’s a bright and poppy film despite it’s truly ugly subtext. Its so bright and bouncy that it is almost guaranteed to put a smile on your face. Honestly this version is a vast improvement over it’s stage source since it allows the situations to be made more real and bigger.

While the film suffers from problems from the source novel, chief among them being the fact that Matilda wouldn’t be as charming,  wonderful and as unbroken as she is with the monsters she has for parents, this adaption still hits it all of the right notes.