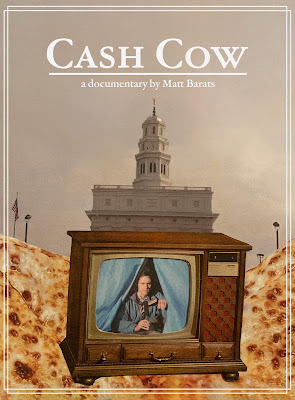 While waiting during the pandemic lock down for his Dominoes Pizza commercial to run actor Matt  Barats starts to mess around and make a PBS style documentary about the town in Vermont which is full of sites important the to history of the Mormon Church.

This is the ultimate DIY film.  Left to his own devices Barats began to make a film to a muse himself. Pretty much shooting it all by himself (it was filmed in October 2020) the film follows Barats as he goofs around to fill his time, and then as he gets more serious about the film and has to take a side job to pay the bills.

I love this film. Something about its ever changing nature mixed with its sly humor completely won me over. I love that you really aren't sure where this is going. I love that Barats isn't just doing one thing, he has all sorts of threads running through this. We get the look at being an actor, life in quarantine, the Mormon angle and more.

This film is a joy.

I loved it and while I can't be certain you will too, I think you need to search this film out.  This is something special.