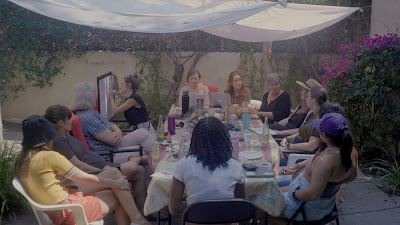 At a time when the religious right is looking to turn women into barefoot breeders like the Taliban in Afghanistan the film PLAN C is vitally important.  The film is a look at the women who are working to make sure that women across the country can get access to medication that will terminate their pregnancy via mail. It’s a film that may end up being used in court cases since it people in the film are risking their lives to do what is right.

Welcome to the world Big Brother. If you want to know how dangerous this film is consider that many of the women and even more of the locations are obscured so that police agencies won’t have an easy time tracking anyone down. This is a scary place to be. America used to be a place where people could control their own bodies.

The film covers a lot of territory in it’s 100 minutes. Not only does it give us the story of the women using the mail to aid women who are looking to hold on to their reproductive rights, but it also the erosion of personal rights and the rise of the right, showing how the pandemic helped to change things. Additionally we get a look at the stories of some of the women and how their lives have been affected by pregnancy, abortion and the new rules. It’s a heady mix that is going to give you a great deal to think about.

While there is much that I love in the film, what really struck me was the way the new draconian rules actually impact people. We get faces to go with stories. We also get to see the insane Kafka-esque way that women have to now go about in order to be autonomous.  Nothing is as simple as just going to
another state.

I was rocked and it will rock your world too.

Destined to be talked about, argued about and litigated for years PLAN C is a must see especially if you have any women you love in your life.