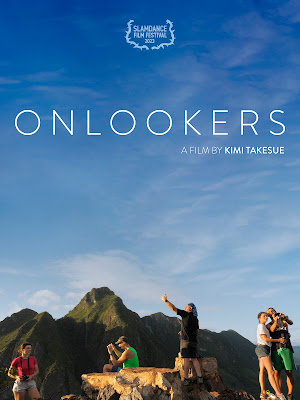 If you get to see ONLOOKERS you need to see it on as a big a screen as possible with as good a sound system as possible. I was talking to someone connected to the film after I finished it and the first thing I said was I wish I had seen this in IMAX.  It’s that sort of a film.

Actually what the film is is a series of shots of life and tourists in Laos. Each shot, which lasts for several minutes, portrays life in the country and along a river. We watch as people travel, shops open, tourists take a trip down a river. Its’s all very very loosely tied together by a group (or is it several groups?) of monks wandering through the country.  There is no plot, simply life.

I see a number of similar films each year and they can be very hit or miss. Some films hold our attention and some don’t because there isn’t enough there to keep us watching. With ONLOOKERS that isn’t the case. We are drawn in. In many of the shots there is life everywhere in the frame and our eyes dance about trying to find each little detail. The sound design is also extremely aggressive. Forget the Hollywood blockbusters this is the real deal. We are not in a made up soundscape but in real place. Listening to the sound through headphones was a wicked experience. I had the sense of people and things moving all around me on different levels. I really wish I could have seen this on a huge screen with a great sound system.

If you want to take a trip and not leave the theater, this film is for you

Recommended, especially if you can see it big