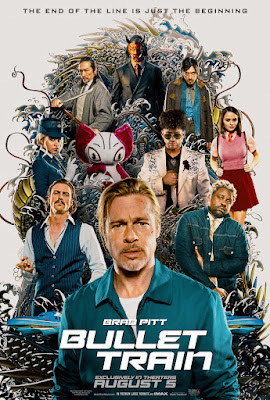 Bullet Train is a crazy over the top action film full of humor and violence. It’s a carefully modulated ride that requires that you pay attention to all the crazy ass details and click with its over the top manner.

The plot has a back in the game assassin Brad Pitt acting as a filling in for a co-worker in  a simple grab and dash job on a train.  The idea is just to get a briefcase and step off the train. However things become complicated when he finds other assassins on the train with their own agendas. Additionally Pitt’s unfortunate luck, which means that people around him die unexpectedly, is in full bloom.

I had delayed seeing Bullet Train until it hit Netflix because I couldn’t find a time slot to see the film in theaters. I had heard good things about the film and I didn’t want to go when I was too tired. Seeing it at home meant I could see it when I was ready for it.

I liked Bullet Train a great deal. It’s a wonderfully mindless romp. Is it way too neat? Yes, absolutely. The fact everything ties together in a big WTF ball of nonsense kind of takes the edge off it, but at the same time it is just a blood soaked confection.