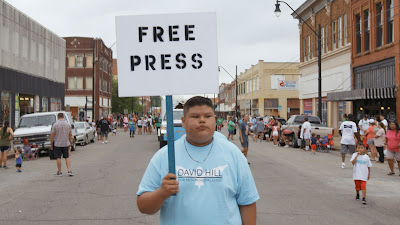 Imagine a scenario, if you will, where the federal government controlled the entirety of the media. Ask North Korea and China’s citizens how well that works for them. Native American tribes are sovereign nations. They do not have freedom of the press. In the Sundance 2023 documentary from Rebecca Landsberry-Baker and Joe Peeler, BAD PRESS exposes the crushing actions of tribe leaders to remain in power. MVSKOKE MEDIA journalists are under attack while the Chief manipulates the Muscogee community with misinformation. Who will protect the truth?

Bad Press describes the hierarchy of tribal media. Money and politics rule, making a constitutional Free Press amendment vital to every nation. The film follows the journey to change, from new candidates for a new chief to election fraud allegations, and boy does it mirror national shenanigans. MVSKOKE MEDIA journalist Angel Ellis and her colleagues report everything in real-time, fighting against fear, false claims, threats, and connected politicians who wish to silence them.

The biggest question becomes, “What do you have to hide?” BAD PRESS is the perfect Sundance 2023 companion to watch with Fantastic Machine. It’s a heart-pounding, sweaty palm viewing experience. The emotional gravity of this story is shocking. BAD PRESS is a microcosm of tribal oppression and global journalistic reality. Those in the film are brave as hell for speaking out. National news, take note. Transparency is key.