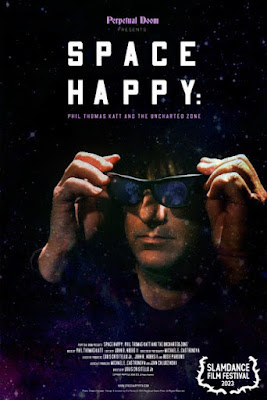 Portrait of Phil Thomas Katt a musician/filmmaker/artist who is working on the fringes of the entertainment industry in Florida.

I'm not entirely happy with the PR information on the film in that it infers that Katt and the people in his orbit don't have talent. They have tons of talent, what they don't have is money and they struggle to do what they love despite having to cash to do so.

I really liked this film. Hell I really liked Katt and his friends. These are really cool people who are making some really good music despite not having any cash. I completely relate to their struggles since doing Unseen Films is a labor of love for me that doesn't pay me monetarily.  Watching the film I kept thinking that if Katt had a little bit more money he might actually get some traction and make it big. (Hell A&E should do a series on him)

Assembled from decades of video we get a nice over view of Katt and his life. Actually hat the film does is make you want to find Katt and hang out with him and have you tell you the stories that aren't in the film.