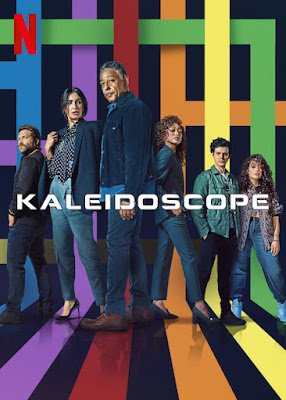 Many years ago, someone told me that you can read Neil Gaiman's graphic novels for The Sandman in any sequence (although the final one really should be read last). I had already read The Sandman so I could see where this would work, and I was fascinated by the idea. That's why I was excited when I heard about Kaleidoscope, a new Netflix streaming show where the episodes can be viewed in any order.

In Kaleidoscope, Giancarlo Esposito leads a team planning a robbery of untraceable bearer bonds held at a corporate security firm run by Rufus Sewell. Telling you anything further on the plot or setup would be a disservice, regardless of the sequence in which you watch the episodes.  But it isn't a spoiler is to say that the episodes are constructed so there are 2 Flashback episodes, 3 Planning episodes, 1 Heist episode and 2 Aftermath episodes.

Kaleidoscope's plot doesn't reinvent the wheel with heist stories, or with episodic TV in general.  It's entertaining yet formulaic, with the same tropes we've seen many times before (the only thing that really changes in capers is the technology).  Netflix will randomize the order for you, but the real fun of this show is in structuring a custom narrative that fits your plot interest and story tastes.  You can watch the whole story in chronological order.  Or backwards.  Or in rainbow order (the episode titles are colors - "Red," "Orange," etc.). How will you start? What should come after that? Which episode will be the finale? Should the next one you view be a Flashback, Planning or Aftermath episode?  Which makes the most sense storywise? What information do you feel you need? Do you want backstory or payoff? Or is it time to watch this heist you've heard so much about?

No matter the order there will be twists and reveals.  The plot might be pedestrian but the interactive storytelling device invigorates the viewing experience; you both create your own unique puzzle and solve it. It's both ambitious and innovative; you feel like you have a more of a stake in the story since you have a say over what part of it you watch next.

Of course, working as an unpaid employee for Netflix on a show where the showrunner and editor seemingly quit and left you to assemble individual episodes into a (hopefully coherent) series may not be for everyone.  I can't stop wondering how different my experience and opinions might be if I had watched in a different order. But that's part of the fascination: thinking about storytelling, its purpose and narrative structure and how all those factor into a viewer's ultimate experience and enjoyment.

A persistent criticism of nonlinear narratives is that it's a crutch for a weak story. Personally, I like a fun gimmick and feel it only elevates material, regardless of the quality. And it's nice to remember that how we tell a story is as important as the story itself.