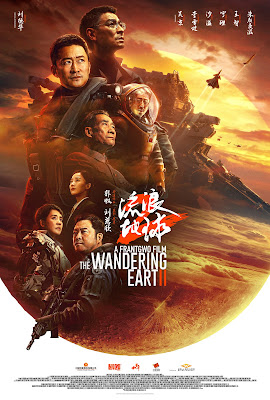 This prequel to one of the biggest films in history is even crazier than the first film. Running just under three hours this film is full of delights to please the eye, even as it jettisons all logic and reasoning right out the window.

The first film was the end of the tale. It told of a mad race to move the earth out of orbit before the expanding sun swallowed the planet.  After much craziness the  earth was moved and mankind was saved. Since the story effectively ended in the first film, this what happens before that. Mankind races to save itself as some people try to stop it and some people try to move our consciousness into computers.

If you see this you will want to do so on as big a screen as possible since it is a tale told in epic style with dozens of speaking parts, and story that spans decades and an arresting visual style. Its a series of rip roaring action set pieces that look exactly what they are, the most amazing computer generated images money can buy.

At the same time this film is emotionally and dramatically dead. This is awesome visuals trying to tell a story with way too many characters moving so fast because there is so much to tell  that every thing and everyone is lost. There are no people on the screen only cardboard characters. There is no fleshed out narrative only too many notes on a single sheet of paper. This should have been a mini-series because even at two hours and fifty three minutes  there isn't enough time for this expansive plot. I was never engaged because I had no idea who anyone was nor what anyone was trying to do. Yes the set pieces and visuals kick ass  but they aren't connected to anything.

And on top of everything else this is one of the most militantly pro-country of origin film I've ever seen. In all seriousness I don't think I've ever seen a film that was nominally not propaganda say so much good about the country of creation and so bad about the rest of the world. In other words even by the insane standards that the Chinese government has set over the years this film is as jingoistic as they come. It's pro-China and Chinese notions of society and control to the most ridiculous level. At first I laughed at it but then it just got annoying.

Frankly I loved the first film. It was big and loud and stupid as a stick, but it moved like the wind and was fun. WANDERING EARTH 2 is the same only more so minus the fun.

This looks great but otherwise there is nothing here.