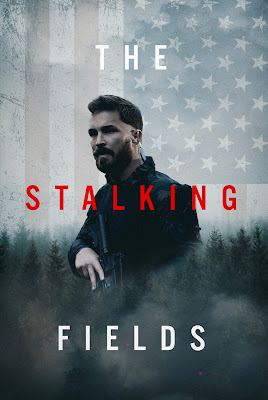 I am kind of annoyed about STALKING FIELDS.  The promo material film talked about the film being a film about it being an action film or thriller about PTSD that was made in an effort to show the ramifications of the disorder.  I had thought it was going to  be a thriller of sorts that had some sort of edge or meaning. The reality is the film is little more than a retread of THE MOST DANGEROUS GAME.

I think this the 937th version of the classic story produced in the last year or so. In all seriousness the hunting humans trope seems to have replaced zombies as the over done subgenre I am asked to review now. I wouldn't care except that the vast majority of them are exactly the same with the only difference being the budget.

In it's favor anything out side of the rooms of plastic used to represent the military base looks good. I mean really good. The shots in the trailer made me want to see the film. The cast is mostly serviceable,  and much of the action isn't bad....

...unfortunately the plotting is terrible and the characters are often one note. This is the sort of film where from the outset you are going to be talking to the screen wondering what is going on. The plot has a secret government funded company kidnapping people and bringing them into the woods where soldiers and agents withe PTSD hunt them. Some how this is supposed to help them or keep them under control or something. Whatever it is makes no sense. It makes no sense in the frame work of the film and even less in the real world. Each turn had me scratching my head.

Actually this is little more than a slasher film except with grand pretense and automatic weapons.

Not worth the effort.

Email ThisBlogThis!Share to TwitterShare to FacebookShare to Pinterest
Labels: not worth the effort