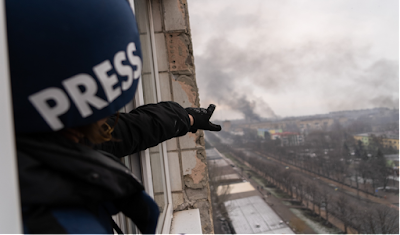 20 DAYS IN MARIUPOL follows director Mstyslav Chernov and his fellow reporters during the first 20 days of the Russian invasion. We watch as they stupidly think that the Russians won’t target civilians, through various battles and on to the their needing to be rescued from a besieged hospital.

A portrait of what it is like to be in a member of the press 20 DAYS is very good. Watching it we come to understand what it takes to cover the insane war that the Russians started. It’s a war that is unlike any other in many ways and exactly like every others since it involves so much death and destruction.

As good as the film is in showing us what it’s like to be covering the war, the film remains a tough slog to get through.  The problem is not the images or the arc of events but its due entirely to a narration track that is so low key, low volume and growling, as to be somnolent snoring.  Its so uninvolving I had to fight not to turn the film off.  While I wanted to see how this all played out, I was made disinterested by the narration. There is no sense of urgency, or even caring in it.

Honestly my thought while watching the film was that this was the least interesting Frontline documentary that I had ever seen.

As vital and important this film is, the narration makes this the first film on the Ukraine war that I would say skip until it plays PBS.