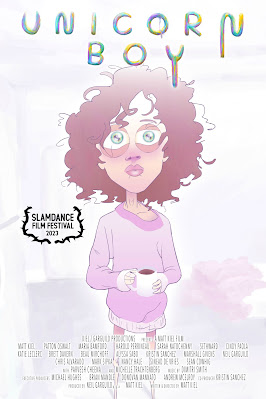 Young man has an encounter with a unicorn and it changes his life and sends him on a quest to find out who he really is.

UNICORN BOY is a really good film. Its a great film about finding yourself, but there things in the film that unfortunately may limit its audience

The thing about Matt Kiel's film is it comes with a great deal of baggage. Begun before the pandemic the film was shaped by a descent into depression after which they went through self reflection and came to terms with their gender identity. The finished film reflects Matt's search and path to self discovery.  It is a clever and funny film  with some wonderfully twisted turns. It's an animated film that operates in its own wonderful world. Then we get clips of Matt that book end the film and the film feels off. (yes I know it's just a couple of quick clips but its still enough to make it feel off)

I suppose if you read all the press material, which  is more a discussion of how Matt came to make the film and how it represents their journey than it is of the film, the inclusion of the end clips may make more sense, but just going in blind, as I did the first time it felt off. Even watching the film a second time, after reading all the press material it still felt off. Is this a universal tale or just Matt's?  Yes I know it will allow some people to connect to the film, but at the same time, Matt said everything that needed to be said in the animation.

Thinking about it over the last week since I saw the film, the real problem is that the return to reality deflates what went before  because the real world and real Matt are less interesting than the animated ones.  I want to hang with the animated Matt in a world of unicorns and not the real one (sorry Matt).

Admittedly this film wasn't made for me. I know I am not its intended audience. At the same time I liked the story told I just wish I could have stayed in the happy place.