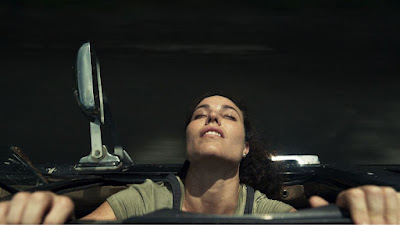 Isel Rodriguez gives a staggering performance In THE FISHBOWL a film about a young woman trying to decide how to deal with the cancer that has reoccurred.

The plot of the film had Noelia (Rodriguez) running out on her partner and back home to her mother when it's clear her cancer is no longer in remission. There she reconnects with friends and family and ponders the damage done to the small island by the American military which left the landscape littered with unexploded bombs and poison.

While the script juggles way too many plot threads for a 90 minute film, we continue to watch and stay focused on what's happening because we fall in love with Rodriguez's performance. She lets it all hang out and we feel her pain, both physical and emotional. She brings us in and holds us close and as a result we are there for the duration. As a character study this film can't be beat.

This is one of my favorite films from this years Sundance