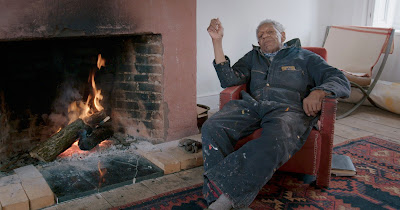 This portrait of artist David Bradley is great. A magnificent marriage of image and sound, this is a near perfect look at a man, his heart and the music close to his heart.

Bradley was a major player in the art world in the early 1970’s. After being the first African American to get a big gallery show  in the galleries on 57th Street his fortunes began to change and he moved out of New York City. At the age of 79 he is still working and still listening to the Jazz that inspires him.

I love this film. It is a film that is just so many things it makes me want to watch it over and and over again to see the various facets of the film and of the man.

Its magnificent look at the creative process thanks to Bradley telling and showing us how he works.

It’s a look at the struggles of an African American Artist in a changing world.

It’s a kick ass Jazz film with Bradley filling the film with incredible music from his favorite artists, many of them he knew.  I love the story he tells about working in a gallery and having to talk to the rich and famous about the art they were buying.  One day Paul McCartney came in during the height of Beatlemania and while everyone was going crazy he was non-plussed since he knew Coltrane and Davis and didn’t really care for the music from Liverpool.

And if that doesn’t clue you in, this is also a wonderful portrait of a man who has lived long enough to just go with it. This is just like hanging out with him and shooting the breeze. He lets us in talks about his life, his philosophy of everything and his art. It’s a film with the perfect pacing of a lazy afternoon, where nothing is rushed and we are simply enjoying each other’s company.

If you want to slow down and get to know a great artist, this film is for you