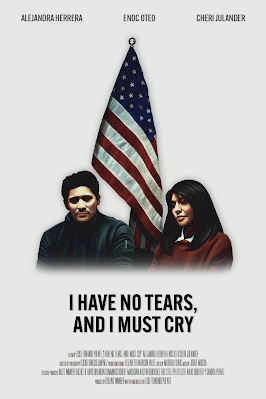 I am not certain what to say about I HAVE NO TEARS… This story of a man and a woman who go into meet with an  immigration official about the woman staying in the United States. It is a capsule of what happens during the brief meeting and what happens on either side of it.

As it stand it s a beautifully acted, great looking film that perfectly captures a moment.

And that is the problem with the film, this Is a moment in time. While we are moved by what happens, there is clearly more to the story. The lives of everyone on screen bleed off the screen since the film is very much alive. However the film leaves us wanting to know more. What happens next? What happened going into this? We can make assumptions but I liked the characters enough I want to know what happened.

As good as the film is it left me unsatisfied.

Quibble aside this is worth a look