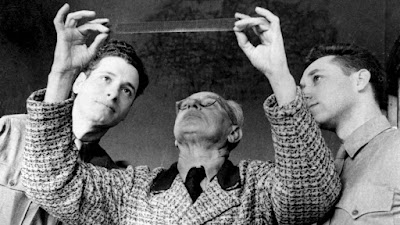 This is the story of the  work of Stuart Schulberg and his brother Budd who at the close of the Second World War became attached to John Ford’s army film unit and were tasked with tracking down the photographic evidence to be used during the Nuremberg Trials.  Working with a short lead time the pair raced to get the evidence needed to convict the defendants. They were also tasked with preparing a film on the trials.

This is an excellent, if much too short, telling of the men whose work made sure that it would be hard to forget the crimes against humanity committed in the 1940’s. It’s a compelling story that many people don’t know but really should. Partly because it’s an open window into history, but also because the story is a compelling one that gives us pause.

If there is any problem with the film it’s that the film is only just under an hour. Having seen several other pieces on the Schulbergs I know that there are even more stories that could be told. The pieces appeared about a decade a go when Stuart Schulbergs film  NUREMBERG A LESSON FOR TODAY was reissued and have stuck with me ever since.

To be honest my quibbling about the length of the film purely a case of gilding the lily on my part since I enjoyed the hell out of what is here and wanted more.

Highly recommended. This is a must see.