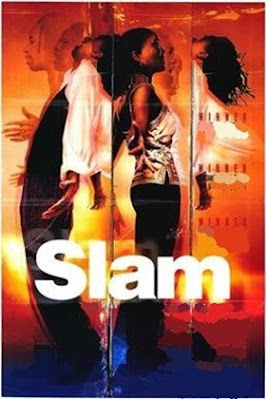 25 years ago SLAM played Sundance and won the top prize. Now it’s back in a newly restored version and I am left to wonder why this film slid out from view for so long?

This film kicks serious ass.  Looking fantastic in a new restoration, the film has renaissance man Saul Williams as a young man who deals with the life by competing in poetry slams. It real and raw, and despite the fact I knew it wasn’t a documentary I kept slipping into thinking it was.

Few films of the last quarter century feel this alive. This is a living breathing document not only of the time it was made but the modern age, the anger and uncertainty of the life it shows hasn’t changed. Watching it is like watching lightning dancing around inside a bottle.

How is it that this film seems to have been slipped off the cinematic radar.

Watching the poetry slams was a visceral experience. You can feel the urgency bleeding off the screen pulling us into the moment by our throats. These moments are so arresting that they highlight the films only real flaw, out of place audience reaction shots during the slams.

This film is a stunner. Anyone who loves their cinema alive and vital and charged like a live electric wire must see this film.