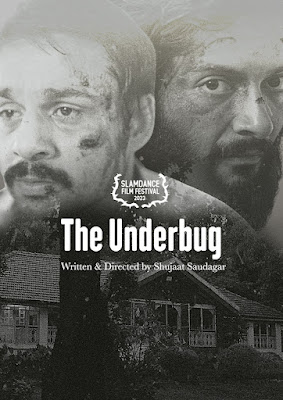 The Underbug is a moody thriller about two men on either side of sectarian violence in India stumbling into a strange house. The house is deserted, or seems to be, except for the men who are soon faced with problems greater than themselves.

This is a great looking tense “horror” film about the things that go bump in the night and the evil that lurks in men’s hearts. It’s a film that you must see as big as possible and with as fee distractions as you can manage (a darkened theater would be perfect.) I really loved much of this film. This is perfectly made thriller with some genuine chills in it. Actually it has more chills in it’s 68 minutes than most Hollywood thrillers that run twice it’s length.

The only flaw in the film is the politics. While there is nothing wrong  with the inclusion of the references on the face of it, some of it seems to be tad heavy handed. No, the references aren’t constant, it’s more that a number of the references seem to be there to remind us that more is going on than scares.

That said, this is one of the moodiest horror films that I’ve seen in years. Every frame from the first to the last has chilling beauty to it.

A must see for horror films, especially anyone who wants one that isn’t your typical one.