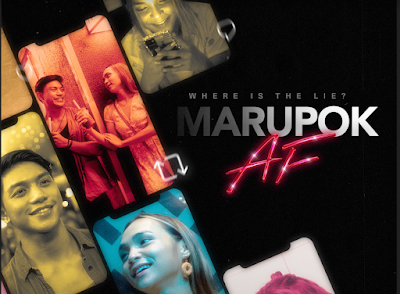 WHERE IS THE LIE is a really good film.  A look at love in the modern age it’s a based on a true story film where a woman named Jazen breaks up with her boyfriend. Turning to a dating app she meets the perfect guy who ends up ghosting her. However what is going on is something else entirely.

I don’t know all of the details of the actual events, and I don’t really care because what is on screen in WHERE IS THE LIE is really good. A look at life and dating in todays world it shines a light into a lot of places that we may not be contemplating, such as catfishing games set up by people with too much time on their hands. It’s the sort of thing that makes me glad I’m too old for those sort of games.

I really liked WHERE IS THE LIE. The  cast headed up by EJ Jallorina is super. We really like pretty much everyone and they pull us into all the mystery of what is going on. I was hooked early and when it was done I wanted to go back and take another ride.

One of the things that I loved was that this film which is very much tied into technology and apps actually manages to use the cinema screen to replicate what we the characters are seeing on their phones and devices.  This may not sound like much but more and more in films we are flashed visuals that are supposed to be a phone or tablet or computer screen, by the more often then not the filmmakers don’t manage to make it movie friendly. Yes  we are seeing what the characters are doing but its not cinematic. Its intrusive with lot of stuff we don’t need. Here director Quark Henares designs the shots  so that we both get a sense of what is on the screens the characters are looking at but we also get something that works cinematically. That may sound like a small thing but it’s not, because too often the technology shots simply don’t blend into the film as a whole.

This is a super film. I had a good time. It mad me laugh and it made me think about love, and the madness of these times and the crazy things people do.

This is a gem.