Back To The Wharf (2022) hits digital Tuesday 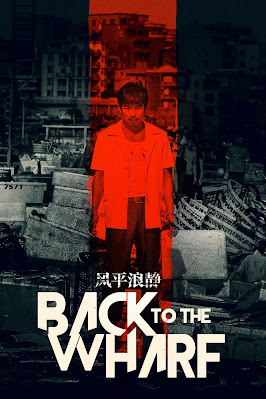 A young man looking for a friend during a storm is forced to stab  a man who mistake him for a robber. The boy’s father seeing what happened, tries to reason with the man who threatens to destroy the kid. Seeing his son’s life ruined the father kills the man and then sends his son away. Fifteen years later the know grown up kid returns to face his past and finds only darkness.

Bleak crime melodrama is a wonderful feel bad film. This truly is a modern film noir where one bad act destroys everyone. Its a poisoned confection that will kill your soul.(That's a rave)

Stunningly shot so as to make us think that the world is perpetually filled with gloom and rain. There is a tactile quality to the film with the architecture being a major character in the film. It’s a film where there are times you feel that the locations are working either for or against the characters. The images propel the story as much as the characters and the script.

Highly melodramatic this film may not work for everyone. There is a heightened sense of emotion everywhere that both makes us think this a pot boiler, while at the same time is dead on perfect for the presentation. The emotion bleeds off the screen.

This is a hell of a ride and it will make you want to crawl into a corner and die because ultimately life sucks and we are all doomed by the missteps we made years ago.