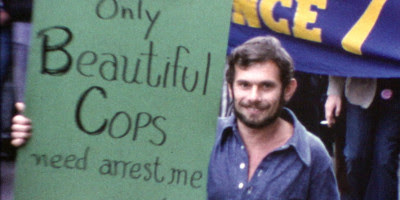 I have seen REEL IN THE CLOSET and I seriously considered not saying anything about it.  My reluctance to say anything  come from a real desire to simply want to take the director and shake them until he recuts the film. I was bored to tears as if I was watching the worst PBS documentary.  To me this film is much too dull to be finally be showing the lives of all of these great people The subject of collecting the photos and films of LGBT people over the last century needs a much more exciting telling. The actual home movies is great the people talking about it and its arrangement is less so.

I'm sorry here is this treasure trove of material and fantastic story behind it and we're presented with a completely pedestrian film. This should have been a 90 minute fireball instead of a 60 minute piece that feels too long.

Would someone please take the material in these archives and make a great piece of art with it.

The film has finished its one DOC NYC  screening
Posted by Steve Kopian at November 17, 2015