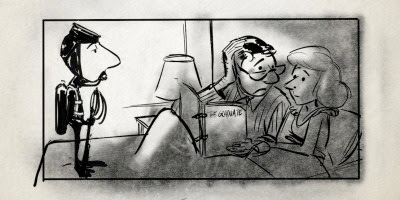 This is the life and love story of Harold  and Lillian Michaelson. Harold did production design and storyboarding. Lillian did research. Most of their work is uncredited  but it's work that spanned decades and ended up in countless film classics. The film follows their meeting after the Second World War and take it through their sixty years of marriage

One of the films I was absolutely looking forward to at DOC NYC was one of the big disappointments. Its not there is anything wrong with it as such but it is awfully dull and kind of dumbed down with bits of explanation in places where they don't need to be- for example anyone who is really interested in this is probably going to know what a storyboard it. A large part of the first third concerns the couple's dating and early days of marriage with very little talk about the films that they worked on. While it's interesting to a point, it's not why we are plunking down money. And when we do get to the good stuff its blandly told. Imade it to the end but when I was done the movie was already fading and I was looking for the next film,

For die hard movie fans only

The film plays Tuesday and Wednesday at DOC NYC. For tickets and more information go here.
Posted by Steve Kopian at November 14, 2015