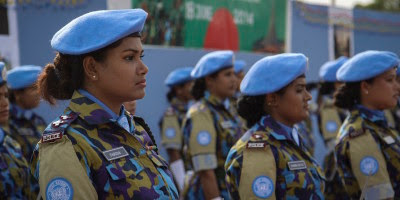 Following a group of women from Bangladesh who are selected to be part of the UN Peace Keeping force in Haiti for a year. We watch as the women train, deal with their families reluctance to let them go, their time in Haiti and what happens when they come home.

A very good film about a group of people most people have no idea even existed. I like that this film put a face not only on the blue bereted UN Peace Keepers but was smart enough to follow the women before during and after their time keeping the peace. The time afterward is a big plus since we get to actually see what happened and not get a few lines of text before the credits roll.   It's a solid film I want to take another pass by away from the crush of the full DOC NYC slate.