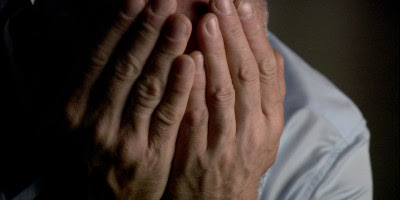 The story of Nick Yarris a man falsely convicted for rape and murder, He spent 21 years on death row.

Odd ball documentary is less documentary than theater piece as Yarris sits in a chair, nominally in prison and tells us his life story. However what he is saying is carefully scripted with each word being carefully measured.

I'm kind of mixed on the film. While I am intrigued and angered by the story and what happened to Yarris I'm less enamored of how the film is being told. There is nothing wrong with Yarris himself, however the script he is working would have been better suited on the stage where the theatricality of it all would have worked better. This shouldn't infer that the film is bad only that it's not quite as compelling as it could have been.

The film plays on the 15th and 17th. For tickets and more information go here.
Posted by Steve Kopian at November 12, 2015