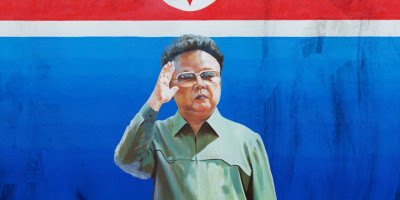 One of the highlights of this year's DOC NYC is I AM SUN MU about the North Korean Artist who is setting up his first solo show in Beijing. Actually that should be that Sun Mu is a defector from North Korea and his name is a cover to protect his family.

The film is partly a record of Sun Mu relating his story of growing up inside North Korea, where he was, and kind of still is, a true believer. Leaving his homeland simply to get something to eat, he now turns the propaganda art he used to do in his homeland on it's head. We learn all of this as he travels to China to set up his first solo exhibition, unsure of what the North Koreans might do.

A truly great look into the mind set of a defector we gain a great deal of insight into what other people in North Korea may feel. At the same time we get a wonderful sense at the kinds of images that those in North Korea see on a regular basis. Having Sun Mu walk us through his art is enlightening on any number of levels.

I loved this film a great deal, The film represents a different way of looking at North Korea and its madness then we are used to. As one of the Chinese artists helping Sun Mu says his art isn't full of pain and suffering but of hope. By profiling the artist director Adam Sjöberg forces us to consider not only what we think of North Korea but also other countries as a well.

As I said at the top this is one of the real highlights of DOC NYC this year.

This film plays Sunday the 15th and Tuesday the 17th and is a must see. For tickets and more information go here.
Posted by Steve Kopian at November 09, 2015