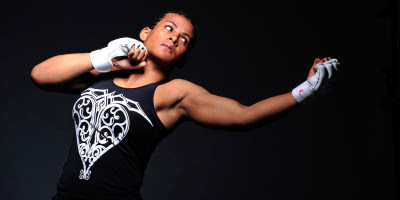 GAME FACE is the dual portraits of Fallon Fox, MMAs first transgender pro fighter, and Terrence Clemens, a gay college basketball player in Oklahoma. We follow them as they try to overcome discrimination and make careers in their chosen sports.

I don't know what to say other than this is great film.

This is a super look at the trials and tribulations of being a gay athlete and what that means today. While the film is extremely positive the film also shows the negative. We see the pain inflicted by small minds as well as the love and acceptance of friends.

What makes the film work is that both Fallon and Terrence are such likable people. I know you are thinking that a film wouldn't have been made about them if they weren't. But to be honest there are a whole bunch of film out there where we are brought into people we really don't like and it hurts the film. (There is at least one film also playing at DOC NYC where that happens).  GAME FACE gives us two great stories with great people at their center and we are lifted up by it.

I love this film a great deal. I regret seeing it too late to include it in my Must See at DOC NYC list, however it will be on my end of festival  Best of list.


The film gets one screening Monday night and if you want to see a film that will make you feel good see GAME FACE.

For tickets and more information go here.
Posted by Steve Kopian at November 13, 2015