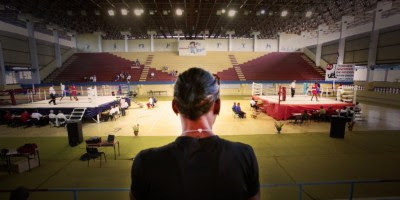 WORLDS ON EDGE-good film on the different life styles in Brazil that are right next to each other.

END OF THE WORLD- A great and haunting film that plays almost like a non-fiction film about what happens when a night time radio talks show host takes calls on the end of the world. This is a just a great little film that grabs you and sucks you in and drags you along. What a super little film that I really wish was a feature because it wouldn't get lost and could be shown to more people. Frankly I've been talking this film up more than some of the features. I have been talking about this since I saw it to anyone who'll listen. Track this one down.

HYENA BOYS-really cool film about a family in Nigeria that trains animals.

The collection plays Tuesday the 17th. For tickets and more information go here.
Posted by Steve Kopian at November 13, 2015