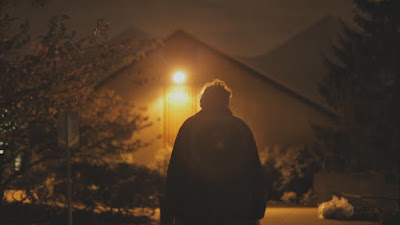 Nathan Reich's HEAVY FOG TONIGHT is a small gem of a film. Its part of the LARGER THAN LIFE collection of films playing at DOC NYC on Monday and it's another reason to see the collection.

The film is a portrait  of Conrad Milster the chief engineer at Pratt Institute and as such he is in charge of the steam whistles. As he reflects on his life Milster struggles with waking away from the whistles and risking them never being heard again.

From the opening moment of Milster climbing out of a boiler while an aria plays on through the end when he crawls back in this is one of the most beautiful films at DOC NYC. The beauty comes from not just perfectly framed pictures, a simple shot of Milster sitting on a chair could hang in a gallery, but also because there is something about the lyric beauty of the story telling. There is something about how Reich unfolds his tale that is truly magical as deceptively simple image reveals something wondrous.

And of course there are the steam machines- ancient steam turbines that still work and the whistles which take us back to a long bygone era. Milster is a man out of time and in love with of beat things, the title of the film refers to a recording Milster made of New York Harbor in 1964 of all of the steam ship whistles blowing. There is a strange beauty to the scenes of New Years Eve 2015 where steam envelopes the crowd waiting for the new year.

This film is simply marvelous.

Tickets and more information can be had here
Posted by Steve Kopian at November 12, 2015