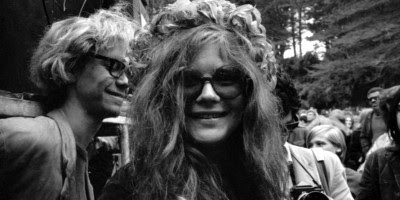 Amy Berg's profile of Janis Joplin is a real mixed bag. It has great music, a touching ending but there is there are a lot of problems with it that keep it from ever really soaring.

Berg's film seeks to be a profile of Joplin from her birth to her death. It consists of lots of interviews with the people who knew her (friends and family), interview footage with Janis herself, her letters and lots of performance footage. While it covers her whole life it ends up being rather bland and at times incredibly superficial.

The problem with talking about the film I run into the danger of making you think its a bad film, it's not its good, but at the same time the film has lots of problems. Because I feel I have to I'm going to say a few of the things that bothered me.

-The sense of time is a tad cockeyed. At one point we're shown pictures marked 1964 and then suddenly the film jumps back to 1963. At other times, outside of the major events there is no sense of when things are happening.

-A lot of people come and go and we have no idea who they are. One of Janis's girlfriends talks briefly about her bi-sexuality but its never mentioned again until we get to Woodstock and Janis is calling her girlfriend to come- who is she and if she's that important why wasn't she mentioned before?

-Janis's drug use is very unevenly dealt with. Its mentioned early on when she was in San Francisco with a fiance and then its brushed under the rug until around the 70 minute mark of the film where it becomes an issue as Joplin was using it after shows to mellow out. At the same time no one but the guy who was her great love thought it was all that bad until it killed her. Even the film kind of underplays it.

Actually until the last half hour or so the film is rather leisurely paced. Then suddenly its a mad dash to the end.

Despite knowing a bit about Joplin before going in through other films and books, I walked out of Berg's film feeling I some how knew less. Additionally the makes a major error is that until the end credits there is no talk about the people she influenced or why-only as the credits whiz by to be hear the women she influenced and why. Sadly its too little too late. I understand that the film is Janis' story but some people really do need to have her importance explained to them.

Over all this its not bad but this film should have been soooooo much better especially since all of the right people are on camera and it has footage from a variety of sources.

That said the film does end up breaking your heart with the realization that had she gotten the telegram that was at the Motel's front desk she might not have taken the drugs that killed her.

The film will be running soon on the PBS American Masters (though how they are going to deal with the language and breasts is beyond me).
Posted by Steve Kopian at November 19, 2015