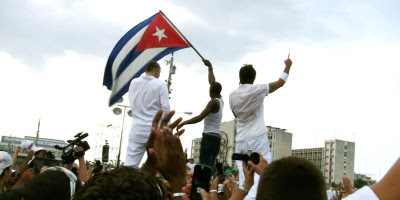 A look at the 2009 concert PEACE WITHOUT BORDERS that was held in Cuba. The film follows the run up to the show and what followed. The film also tries to explain how Cuba is seen by people in the country and by exiles.

You can tell that I am very mixed about the film in that I am running the review after it screened at DOC NYC, and after the festival. While I like the music in the film I'm not sure about anything else with it. Part of the problem is the film is  choppy in the editing, especially in the early part of the film where we jump through several years of time depending on what the film wants to get across. The result is a film that for me is very hard to completely get a grasp on.

I'm also feeling adrift about what the film is really about. The film is very much against the lack of freedom of expression in Cuba, but at the same time the concert happened...

You have to excuse me because the film is this really weird  mix of being in love with Cuba and hating portions of it. Its a film that seems to have been shaped by exiles and their families and yet some of what we see isn't the complete anti- Castro Cuba...

Its kind of like the film has some sort of agenda but doesn't really know what it all is. Part of it is the editing, part of it is I don't think the people who made the film have a real handle on what they want to say. I mean they are nominally telling the story of the concert  but there is all this other stuff in there.

I know I'm not making sense. The problem is that recently I've seen a bunch of films about Cuba and expression there be it art (ALUMBRONES) or cars (HAVANA MOTOR CLUB) which paint a differing picture of the country. I'm not sure what to think is the real story.

Actually I'm not sure what the story is of this film either- I've thought about and I really don't know. I know that may inspire hate mail, or people screaming I don't get it-and that maybe true- but if so please leave a comment and tell me what I'm not getting because frankly I'd really like to know.