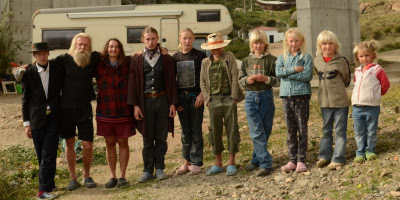 Petr met his wife and the pair moved off into a meadow in a caravan. They then proceeded to live as self sufficiently as possible while raising nine children over the last 25 years.

A portrait of an alternative life style is going to leave many people shaking their heads. Petr is very much a control freak and his way of doing things borders as kind of abusive. Everyone is always together, more or less. Watching the kids interact with some of the outside world was strange to say the least.

While this is a good film, I didn't like the head space the film put me in. While its simply that I wasn't raised in this environment I know I couldn't live with all these people on top of me and with a father this controlling.

ALWAYS TOGETHER  gets its only screening at DOC NYC Thursday at 915. For more information and tickets go here.
Posted by Steve Kopian at November 16, 2015