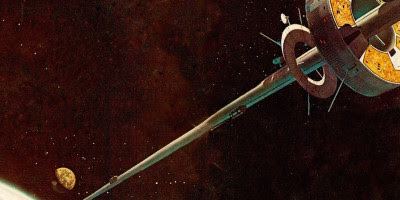 Beginning like the recent STEVE JOBS with footage of Arthur C Clarke talking about the future, SKY LINE then speeds off to talk about Clarke's 1979 novel FOUNTAINS OF PARADISE which put the notion of a space elevator into the popular mind. A space elevator is a long cable  that stretches from the earth up to a space station or platform in high orbit that can be used to to lift heavy payloads and people to space without damaging the environment. Its a notion that has caught on in some parts of the scientific community who know it can work if only we can come up with the technology to make it practical.

This film is kind of like having a conversation of a bunch of science nerds who are overly enthusiastic about something that you find really interesting. You go along with what they are saying for a while but then your eyes glaze over as the conversation drifts all over the place. Here the problem seems to be that the film isn't organized well enough. Talk about how the participants got interested in the project, the business of doing it and of the science of doing it are all mixed together and we kind of bounce from thing to thing and person to person.  Its all there but the telling feels jumbled.  I have the sense that if someone out side the project came in and recut the film you'd have a better film. I also have a sense that this would be better shorter.  I completely understand that the film has to be a certain length to have an easier time getting released but I'm not sure this film needs to be 75 minutes.

Reservations aside, this is worth seeing if the subject intrigues you, other wise it can be skipped until it shows up on TV.