You're on your own with AAAAAAAAH! (2015) Ithaca International Fantastic Film Festival 2015 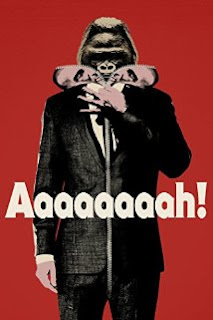 Steve Oram has made a one of a kind film you're either going to love or want to burn. Say what you will odds are you really haven't seen anything like this- at least not for 80 minutes of running time.

The conceit of the film is that people are apes and behave as such through the whole film. The film has two men leaving their  home and going into a city to find a new home and take over. The entire time the actors behave as if they are gorillas.

For me this was a great five minute sketch that lost me about five minutes in. I was ready to bail but decided to hang around to see if I could connect to it. I never did and it made the midnight screening at the Ithaca International Film Festival a struggle. I stayed up late for this? Apparently.

The problem for me really is that once the premise is set up there really isn't anywhere to go.Sure there are some amusing riffs on the people as apes tropes, but largely this played as a one note for me and it made it difficult to get through.

That said some people liked it  and one has to admire IIFFF for being ballsy enough to chllange their audiences with films that really will test them.
Posted by Steve Kopian at November 14, 2015